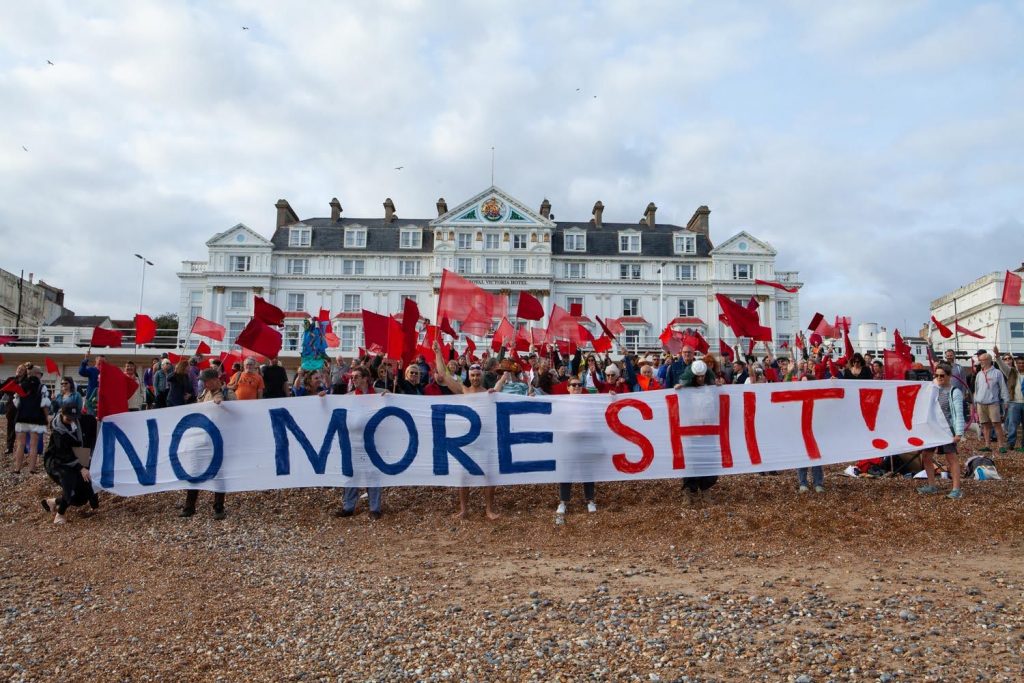 Julia spoke at the Clean Water Action Group protest on 16 August. Read her speech below.

As we know the disgraceful record of Southern Water over many years makes for grim reading and as we can see by the turn out today, people have had enough of water companies putting private profit before clean water – a public good that should never have been privatised. It is in fact a uniquely English problem, both Scotland and Wales water supplies are run on a not for profit basis.

Environment Agency data for 2020 showed water companies discharged raw sewage into rivers and coastal waters in England more than 400,000 times, up 37% on the previous year.

Research by David Hall and Karol Yearwood of Greenwich University has calculated that total the shareholder dividends paid since 1989 have reached  a total of £57bn. This is our money from water bills that should have been used to pay for better infrastructure so we have the clean water we and the natural world deserve.

At the moment, they have the resources to outwit the poorly resourced regulators in Ofwat and the Environment Agency. Local councils, which also play a role in protecting watercourses, have also seen their budgets cut and experienced staff losses, leaving them without the clout to confront private sector operators. I hope today is the start of a big push back against the privatisation of public assets and between us we can find the skills to become citizen activist scientists joining forces along the coast, monitoring outflows, tracking down repeat offenders and holding Southern Water and the Environment Agency and our local councils to account to deliver the clean water we all deserve.

But we shouldn’t have to do all the hard work ourselves when Southern Water directors are getting paid huge salaries and not doing their job. I call on our MP Sally Ann Hart, to demand a public meeting with the senior directors of Southern Water so they can hear the anger of local people and explain their plans for urgently bringing our infrastructure up to scratch.

The government has done a partial U turn on the Environment Bill, thanks mainly to huge public outcry about the 400,000 times raw sewage has been dumped in our rivers and seas by water companies over the past year.

the House of Lords demanded stronger action, adding their own amendment to the bill which would place a duty on “sewerage undertakers to take all reasonable steps to ensure untreated sewage is not discharged from storm overflows into inland and coastal waters”. In response, the government has said it intends to table its own amendment that would place a direct legal duty on water companies to “progressively reduce the impacts of sewage pollution from storm overflows”.

However there is serious doubts about the monitoring of any action. The current system relies on self reporting by the water companies themselves, which doesn’t seem to have worked very well given where we are.

The Environment Agency has been cut to the bone and last week John Leyland, the agency’s chief of staff, insisted rivers were ‘not there for human swimming’ and were instead ‘for the wildlife and the fish that live within them,

I am here to represent the anger of local people who shouldn’t have to resort to citizen science to monitor the quality of our water.

The River’s trust are doing excellent work with their sewage map but we shouldn’t have to be checking apps to see if our rivers and seas are safe to swim in, we should be able to take this for granted.

Some questions raised by Clean Water Action if anyone can comment?

They allotted £60 million to do this.

The government has asked for a cost benefits analysis to be produced by September 22 of 0 emissions.

What is possible by the Ofwat 2025 target, i.e. can more be done than 33% and if so what resources and innovations would be needed to do so?

2 With innovations – such as those at another water company, that is recycling the waste into fertilizer and taking off the dangerous chemicals and processing them, what do they think can be achieved , at what cost, and in what time frame?

These are large questions that require some research, but for-instance, Bristol Energy, who supplies my energy, has renewable sources of gas from human waste. So models of innovation are out there.